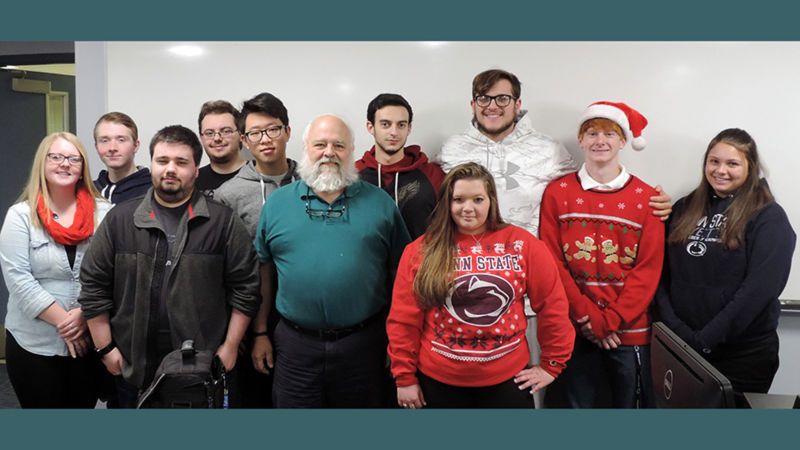 Finding ways to save energy at Fayette campus

While almost every course at Penn State Fayette, The Eberly Campus concludes with a final test, paper, or project of some sort, not very many result in benefits to the environment. But by reconsidering how they live their lives over the past semester, students in Associate Engineering Professor David Meredith’s EGEE 102 class discovered ways they could cut their energy consumption.

Meredith has been doing variations on an energy-saving theme for many years with his classes. Since the course objectives for Energy Conservation and Environmental Protection include gaining a basic understanding and appreciation of energy efficiency and environmental concepts, examining ways to save energy and money, and exploring ways to save the environment, his EGEE 102 course was the perfect match for that kind of hands-on activity.

“This year,” said Meredith, “I announced the project earlier so they had more time to get things done while the weather was warmer. We had just spent several weeks discussing how energy is used in homes and some of the low-hanging fruit of energy losses that are very cheap and easy to fix. So, after educating them about the possibilities, I just cut them loose in a friendly competition to put into practice what the theory says can be done.”

For each student in the class, Meredith set a goal of saving 10 million BTUs, which is about two barrels of oil equivalent (BOE), or $100. Several students encouraged their families and neighbors to get involved in “Project Megasave,” as it was dubbed.

Meredith said there were some unique ideas from this class, including a group that began carpooling to campus and a student who saved 40 BOE by not flying home to China between fall and spring semesters. A recycling option and converting lights either to CFLs or LEDs were the two most popular (and immediate) ways to save energy. Some students chose to put plastic on the inside of single-pane windows, while several others installed insulation jackets on their water heaters.

“Each of those projects will save the homeowner well over a barrel of oil in heating savings each year down the road for a one-time investment of about $25 and an hour's worth of their time,” he noted.

At the end of the semester, the students in EGEE 102 learned they had averaged an annual savings of almost six BOE, worth about $280. Meredith said that if each of the nation’s 125 million households had undertaken and completed this type of project in the same year, then it would represent almost a 1 percent drop in the total energy used each year.

Through Project MegaSave, Meredith tried to make his students become more aware that the actions of individuals can and do make a difference. “Think global, act local is one of the lessons that I want them to experience,” he said. “I think this was a great first step for many of them.”