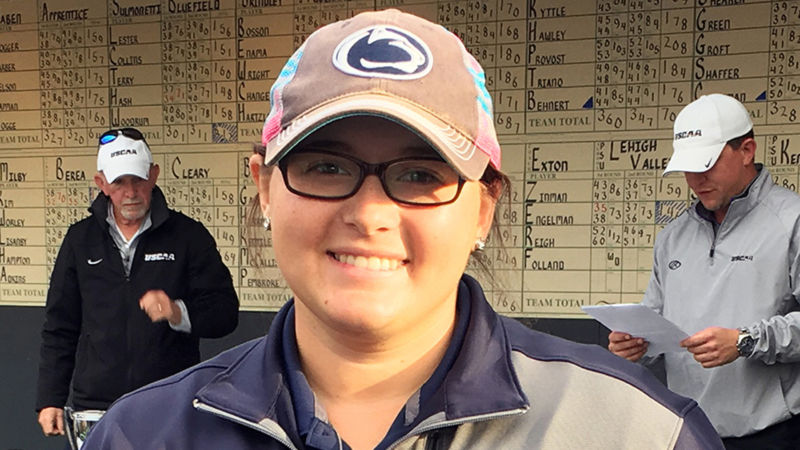 Unopened since 2013, the letters sit gathering dust on Haley Brothers’ desk, waiting to deliver their news of acceptance or rejection from the other colleges where she had applied. She had no desire to read their contents because they arrived after the only acceptance letter that she wanted—the one from Penn State University.

“Ever since I was a little girl, I knew I was going to go to Penn State,” said the lifelong Mount Pleasant resident, adding that she applied to other colleges only at her mother’s insistence. Because Brothers wanted to stay close to home, at least for the first few years, the nearby location of Penn State Fayette, The Eberly Campus made it possible for her to get a globally recognized Penn State degree right in her back yard.

Fast-forward four years, and now Brothers is a senior preparing to graduate in December. During her time at the Fayette campus, she has become very involved with extracurricular activities, and is the current chair of the Lion Ambassadors and Student Affairs Committee, as well as a member of the Student Government Association.

Brothers is also a nationally recognized student athlete, having joined the golf team during its inaugural season last semester. In October, her diligence in the classroom earned her a United States Collegiate Athletic Association National All-Academic Team award, which is given to all conference players with a 3.5 or higher grade-point average.

Aside from the attention she received for her academic excellence, what was it like as the team’s only female member? “Being part of the golf team was one of the best experiences I have had on campus,” she said. Brothers was not sure at first that she would be able to connect with the other members. “But,” she said, “the guys on the team became much more than just teammates—they became really great friends. I am really looking forward to the next season!”

When asked what else she likes about Penn State Fayette, Brothers quickly replied, “I love everything about the Fayette campus!” and then went on to say that her favorite thing is a feeling of being part of one big family. “You cannot walk from one building to the next without someone asking how you are or how you’ve been,” she noted.

That also goes for the employees of Penn State Fayette, according to Brothers, who believes they really care about the students. “Faculty and staff do all that they can to ensure a student is getting the best education,” she said, “and that we are also getting the best Penn State experience possible.”

Once she earns her bachelor’s degree in Human Development and Family Studies, Brothers plans on entering a master’s program. Eventually, she hopes to get a license in counseling and work as a school guidance counselor, guiding future students as they apply to colleges and await letters just like the ones still sitting on her desk.