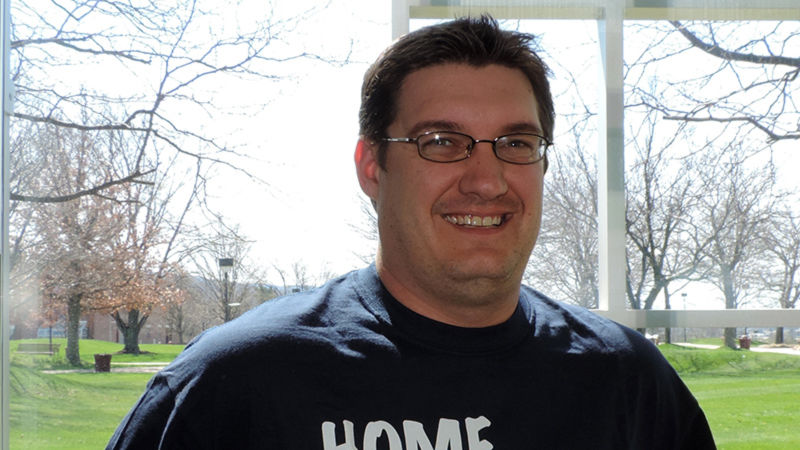 Vet finds much more than he expected at Fayette campus

After retiring from a 19-year U.S. Air Force career spent working on the electronics systems of intercontinental ballistic missiles, Wallace Frost Jr. enrolled at Penn State Fayette, The Eberly Campus to become something he had long wanted: a petroleum engineer. Little did the Uniontown native know that enrolling at the Fayette campus would bring him several other things he desired: love, marriage, and fatherhood.

In 2014, Frost, who is now a resident of Latrobe, accepted an early retirement incentive from the military and moved back home to southwestern Pennsylvania. After seeing all the activity surrounding the booming natural gas industry, which employs legions of petroleum engineers, he figured it was the perfect time to enter college. Once he did some research, he discovered that he lived just miles from the perfect university: Penn State Fayette, The Eberly Campus.

This turned out to be a life-changing decision in more ways than one. On the day that Frost arrived at the Fayette campus for orientation, he met Heather Kibe, a transfer student, and the two instantly connected. “We ended up just sitting and talking in the Community Center, and then we had a couple of classes together the first semester,” he said.

Their first real date also had a Penn State connection: on a sunny Saturday, they traveled to University Park’s Beaver Stadium for a football game. Their relationship blossomed, and a little more than a year later, Frost popped the question on Valentine’s Day. Then after they enjoyed a period of wedded bliss, a daughter, Eva, came along.

Love, marriage and fatherhood came to Frost in a relatively short time, thanks, in part, to his choosing Penn State Fayette, where he is now completing his sophomore year.

Besides its obvious benefits to his personal life, Frost also believes he has benefitted academically by attending the Fayette campus.

“I like how it’s small—and the accessibility of the professors,” he said. “I have a couple of classes where there are five students. It’s a lot more personalized instruction.”

Frost is hoping to get an internship this summer at PennDOT, and he also has something else on the horizon. He and Heather just learned she is pregnant with their second child.

This fall, Frost will begin commuting to University Park to finish his degree. Although the Fayette campus does not have a Petroleum Engineering major, he was able to complete the first two years of his education here through the 2+2 plan, which allows students to begin at one campus and then finish at another that offers their degree.

For someone whose only goals when he enrolled at Penn State Fayette were to get good grades and a degree, Wallace Frost Jr. has gotten that—and so much more.