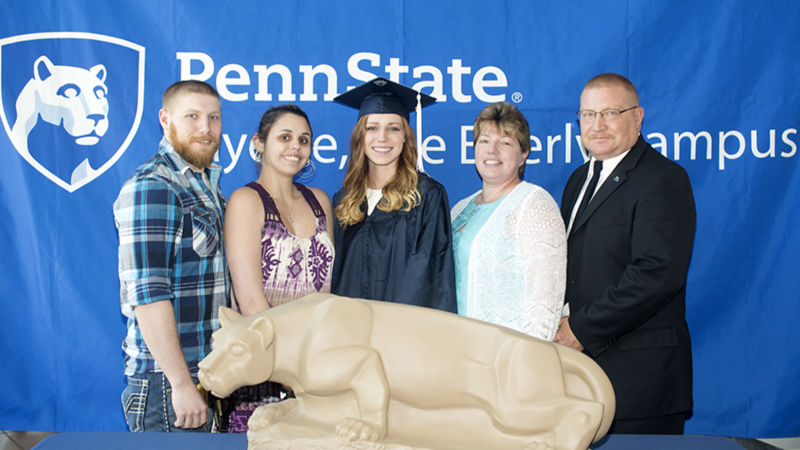 The Williamses keep it in the family at Fayette campus

When Nursing graduate Caitlyn Williams ascended the stage at Penn State Fayette, The Eberly Campus to accept her diploma this spring, her parents and brother were in the audience watching proudly. But unlike the other families around them, the three Williamses knew just how Caitlyn felt because each had participated in a commencement at the Fayette campus.

Caitlyn’s father, Scott, and her mother, Michelle, both earned degrees in Nursing from Penn State Fayette and her only sibling, Andrew, began his bachelor’s in Mining Engineering here. Though he finished his degree at University Park, Andrew too walked in a commencement ceremony at the Fayette campus.

How did the entire Williams family end up studying at Penn State Fayette? It all started with a comment Andrew made in ninth grade.

At that time, Scott was working two jobs—one as an emergency medical technical and the other as a security guard at the Fayette campus, which he joined in 1990.

According to Scott, after he returned home from work one evening, Andrew stated that he saw no need for college since his father was able to work without having a degree.

Scott vehemently replied, “No, you’ve got to go!” and then Michelle interjected, “No—we need to get an education.”

Scott realized she was right and, shortly thereafter, both decided to enter the Nursing program at Penn State Fayette, going on to earn their associate of science degrees.

Michelle is now the director of quality improvement and assurance for Centerville Clinics. Scott continued his security career at the Fayette campus and became certified as a University police officer.

The Williams children not only listened to their parents, they followed their example. When the time came for higher education, both enrolled at Penn State Fayette.

Andrew was a 2+2 plan student who began his bachelor’s degree in Mining Engineering here. He went on to finish at University Park and now works as a compliance officer for Consol Energy.

New grad Caitlyn will continue her education this fall. She is returning to the Fayette campus to get a bachelor’s in Nursing and to complete a minor in Business.

Scott takes pride in being the only campus employee whose entire immediate family has attended Penn State. Why did they all study at Fayette? Because, he said, “You are not a number like you are at other colleges. You are a person here.”

“Going to Penn State Fayette was a great experience,” he continued. “It’s meant everything for my family.”