Teens compete for Pi (and pie) at Fayette campus 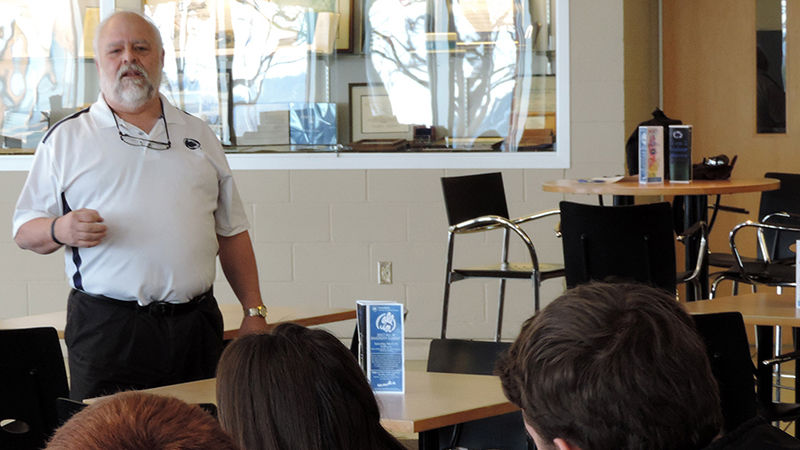 David Meredith, an associate professor of Engineering at Penn State Fayette, The Eberly Campus and founder of the campus’ annual Pi Day competition for local high school students — now in its 18th year — takes the opportunity to inform the teens of the benefits of choosing a career in science, technology, engineering or mathematics.

LEMONT FURNACE, Pa. — Dozens of honors students from Laurel Highlands and Yough high schools demonstrated they were hungry for a win (and a slice of pie) at the annual Pi Day competition at Penn State Fayette, The Eberly Campus, where their mathematics aptitude, as well as their ability to work cooperatively, were tested as they attempted to solve challenging problems.

Throughout the world, Pi Day is celebrated each March 14, or 3/14, and is so named because the Greek letter Pi is a mathematical symbol used to represent a constant, or the ratio of a circle’s circumference to its diameter; the value of Pi is approximately 3.14159.

Originally scheduled for March 14, this year’s event was delayed for two days due to Winter Storm Stella, according to David Meredith, who established the Pi Day competition at the Fayette campus 18 years ago. Although he conducts several other programs throughout the year, the associate professor of engineering especially enjoys this one because it provides students who are interested in math and science with a competition using real-world problems.

For each Pi Day test, Meredith creates 20 multi-step questions that involve everything from statistics and geometry to volumes and density. He said the calculations involved in solving these problems are “a little bit harder” than what the students typically encounter at school.

Meredith’s questions inform, as well as inquire. For example, on this year’s test was one about eye blinking: “If you sleep eight hours a day, your eyes are closed for the equivalent of an extra 23 nights per year, just from blinking. On average, you blink 25,000 times a day while you are awake. How many seconds elapse between the average blink?”

Helping with the 2017 competition were judges Nicole Hill and Kevin Maxwell, senior instructors in mathematics at Penn State Fayette. They were joined by Meredith’s son Mark, a Penn State alumnus who has earned three University degrees, including a bachelor’s in engineering science and physics, as well as a master’s in computer science.

The judges divided the 48 student competitors into four teams of six from each of the two schools and gave them an hour to work on the 20 questions. The winning team was one of those from Yough Senior High. “Apple” team member Jake Sever, a sophomore who also competed in last year’s Pi Day, enjoys the experience. “It’s fun to work together on challenging problems that normally you wouldn’t get in school and see what you can do,” he said.

Another repeat attendee was a former Penn State Fayette Pi Day contestant when she was a student at Laurel Highlands — but is now a teacher chaperone. Ashley Thurby Kolesar said she still enjoys coming to these events and is only too happy to bring her pupils. “I like giving them the opportunity because it goes beyond recall,” she said. “It’s more critically thinking and applying what you know. Higher-level students really enjoy doing those kinds of problems.” She added that working with people is another benefit of the program.

Since all of that thinking can create an appetite, each of the winning team members got a piece of pie as a prize. They didn’t even have to think very hard about which flavor to choose because it was the day’s only multiple-choice question: Apple, berry, cherry, peach or lemon?