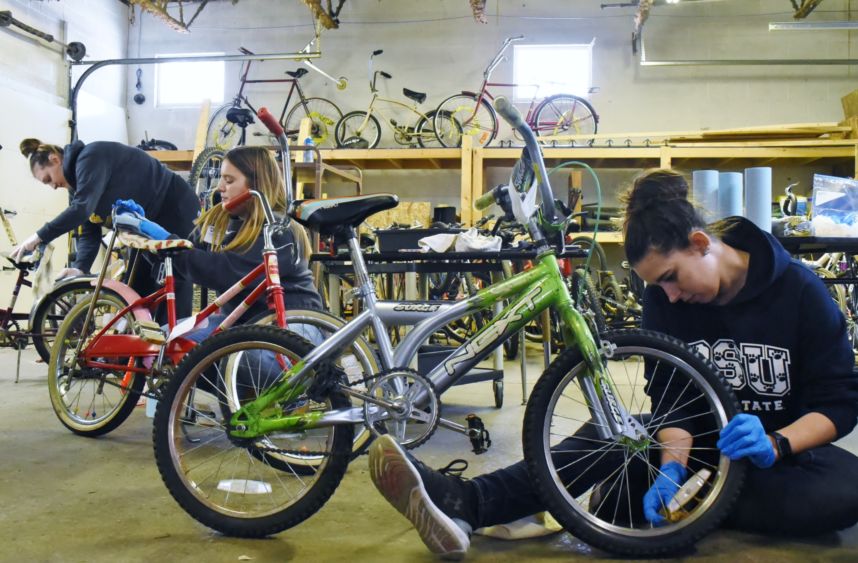 Shannon Josefoski, right, cleans a bicycle at the Sisters of St. Joseph Neighborhood Network in Erie. Josefoski, a student at Penn State New Kensington, was one of 50 students who participated in Erie service projects on Martin Luther King Jr. Day.

ERIE, Pa. — It takes maybe 90 minutes to properly clean an old bicycle. Margarita Dangel, a site director for the Sisters of St. Joseph Neighborhood Network, starts with the chain, and then the derailleur. Those gunk up if the bike has been idle.

Dangel has 170 bicycles in the back of a small warehouse on Erie’s east side. She donates them to neighborhood kids, or to immigrants who move to Erie with help from the U.S. Committee for Refugees.

“In this neighborhood, a lot of people do not have access to transportation,” she said. “A bike can make their lives much easier.”

She oils chains and tightens brake cables. She pumps air into tires. She even shines the kickstands.

On Monday, Jan. 15 — the national MLK Jr. Day of Service — she had help: four students and a staff member from Penn State, which encourages its students to observe the Martin Luther King Jr. holiday by volunteering for service.

To increase their impact, the University’s western campuses — Behrend, Beaver, DuBois, Fayette, Greater Allegheny, New Kensington and Shenango — partner for service projects, saturating a community near one of the campuses with students who are willing to work. This year, 50 students came to Erie.

“The community approach is a core element of our program,” said Chris Fox, assistant director of civic engagement at Penn State Behrend. “When you contribute to something that is bigger than your club, or your campus, it makes the larger community you are a part of feel real and tangible.”

ServErie, a network of Erie churches, helped select this year’s work sites. The students sorted winter coats at the Upper Room, a homeless shelter; created bulletin boards at the Bethesda Trinity Center; and played bingo with residents of the Pennsylvania Soldiers’ and Sailors’ Home, a 207-bed retirement center that opened in 1886.

“I’m from Erie,” she said. “I’m familiar with some of these organizations, so I know they do good work. It’s nice to be part of that, and not just driving past.”

Austin Bixler, a communications major at Penn State Fayette, The Eberly Campus, helped paint the hallways at the Lodge on Sass, a shelter that provides transitional housing for more than 2,000 people each year.

“A lot of people don’t really have a choice when they come to a place like this,” Bixler said. “You take a wrong turn in life, and you don’t even know you’re taking it, and suddenly you’re out of choices. The same thing can happen to you or me. I’m making my choice. I’m paying it forward.”

Marcus Atkinson, the executive director of ServErie, had offered a similar message that morning, when he addressed the students before they traveled to their work sites. He had talked about King and his legacy of service.

“The best life is a life lived for others,” he said. “Serve others. Serve the dream. Not out of obligation, or because you need credit, or because you’re in trouble, but because it is the right thing to do. In time, that will come back to you.”