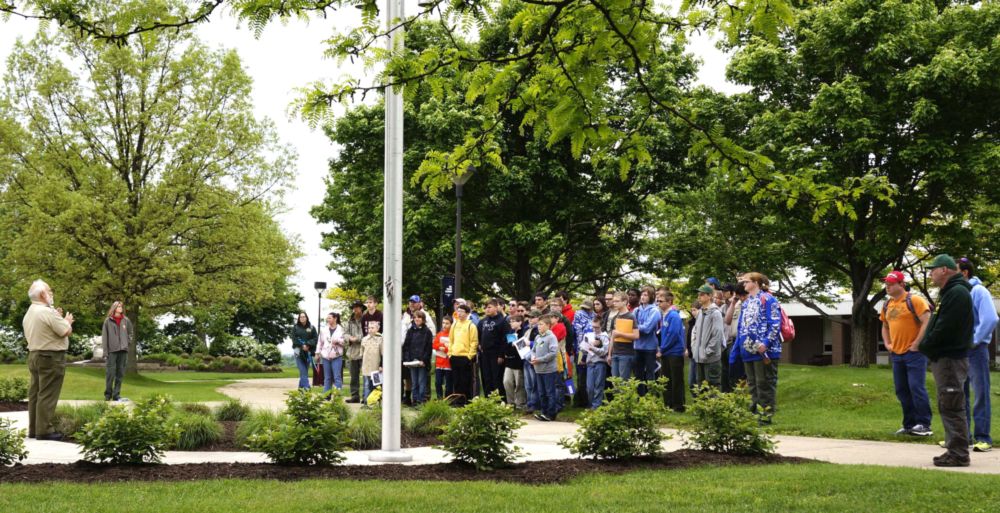 David Meredith, associate professor of engineering, welcomed nearly 60 Boy Scouts from the Old Trails District on a quest to learn — and earn merit badges — to a camporee, held May 14 at Penn State Fayette, The Eberly Campus.

LEMONT FURNACE, Pa. — Fifteen staff, faculty, and retirees from Penn State Fayette, The Eberly Campus recently lent their expertise to a group of Boy Scouts on a weekend quest to earn merit badges. This was the sixth quadrennial time the campus has hosted part of a merit badge camporee, the most recent of which took place May 14.

Almost 60 Scouts, 20 adult Scouters, and parents from the Old Trails District, as well as several others from the Westmoreland-Fayette Council, participated in this effort to earn merit badges, which Scouts receive after an in-depth examination of subjects that can lead to a career.

Scouter and Associate Engineering Professor David Meredith, who has been instrumental in bringing these camporees to campus, was gratified by the response of the Penn State Fayette family to his call for volunteers. He explained how, in March, Scouts got a comprehensive list of 52 merit badges — almost 60 percent of those available, but not offered during the summer at Camp Conestoga. Keenly aware of the need to earn more badges, Meredith asked various individuals associated with the Fayette campus for their help, bringing together a group of 15, including current and former faculty, staff, and even a campus advisory board member, to provide instruction in 24 areas.

Though the Scouts actually camped at a Knights of Columbus facility a few miles away, the campus Engineering Building served as the headquarters and location for most of the 11 simultaneous classes. Instructors also used four outdoor sites for other badges, such as landscape architecture, where a classroom was not the best setting.

According to Meredith, Scouts earned or attempted 140 merit badges at this year’s camporee. They ranged from plumbing and moviemaking to fingerprinting and chemistry, and even included the least popular merit badge, bugling (only 606 per year in the United States). Meredith said the newest merit badge, animation (2015), was offered to six Scouts. Other topics included model design and building, entrepreneurship, and pulp and paper.

Meredith and other instructors were impressed by the Scouts’ intellect, teamwork, and perseverance. “Those young men are the future leaders in this nation,” he said.