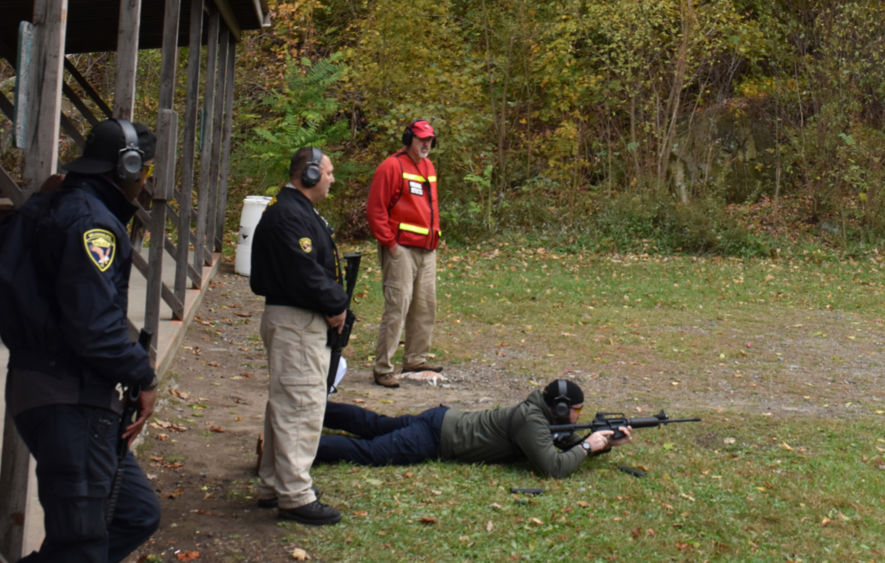 LEMONT FURNACE, Pa. — When Doug Yuhouse, head of training for the Wilkinsburg Police Department, and two fellow officers recently needed to become certified as patrol rifle instructors, he turned, once again, to the Center for Community and Public Safety (CCPS) at Penn State Fayette, The Eberly Campus.

“They have a wonderful program,” said Scottdale resident Yuhouse on a crisp October morning at the South Connellsville Rod and Gun Club. “Penn State Fayette has top-notch instructors, quality curricula, and the name to back up their training. That’s why we go to them.”

For this particular training, Yuhouse and his colleagues, police officers William Coffee and Brandon Rourke, have been traveling to the south Connellsville range, located in a remote abandoned stone quarry at the edge of the Youghiogheny River, where a bear and bald eagle are said to fish for lunch, despite the gunfire.

This was the final day of a weeklong course with CCPS instructor Rocky Younkin, a Pennsylvania constable from Connellsville who had been teaching the Wilkinsburg trio the proper way of handling an AR-15 rifle, using correct safety practices, and how to curb malfunctions. They were now ready to earn their certifications, which would require the three students to shoot different courses while standing or laying on the ground, and then perform such exercises as pivot shooting and zeroing in their weapons. They also would have to switch to a handgun smoothly when their rifles “jammed.”

Although there are other organizations, such as the National Rifle Association, the Smith and Wesson Academy, and private facilities that provide weapons training, Yuhouse believes Penn State Fayette’s programs are of a higher caliber. “They are a recognized facility,” he said, adding that the CCPS will even bring training directly to Wilkinsburg’s police department, which has 25 full-time officers patrolling the town’s 2.2 square miles.

In addition to the patrol rifle instructor course, Yuhouse said Penn State Fayette has provided the Wilkinsburg PD with prior trainings on the use of force and verbal judo.

Yuhouse’s colleague and classmate Rourke, who previously has completed trainings to become certified in less-lethal weapons and OC pepper spray, commented on the CCPS style of instruction. “I think the training is very hands-on” he said. “Their instructors are well-versed in different methods of fixing problems and instructing students on how to become the best they can be.”

Rourke, a police officer since 2006, continued: “They have smaller classes at Penn State Fayette, so there’s more one-on-one experience with instructors. So, if there is a problem, they can give you tips. In the other trainings I went through, typically my classes were 30 students for two to three instructors.”

Individual attention, a wide variety of law-enforcement oriented courses, and experience are the strengths of the CCPS, according to its founding director, Ted Mellors, who said, “We have delivered hundreds of courses for numerous police departments over the last 20 years. We have also developed and delivered courses for the National Institute of Justice and the U.S. Department of Defense’s Joint Non-Lethal Weapons Directorate.”

Mellors believes it is the quality of his teachers that really sets CCPS’s program apart from the others. “We have a great cadre of instructors, most from western Pennsylvania, but have established a network across the United States,” he said. “We have the expertise to develop and deliver any course a police department could ask for.”

The Wilkinsburg officers, Rourke, Coffee and Yuhouse, all were successful in completing their patrol rifle instructor training that Friday, and as they walked around the gun range, gathering their spent shell casings, Younkin completed the forms certifying the men as instructors in their own right.